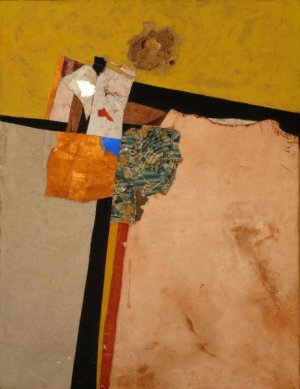 — JOHN JULIAN ARTHUR URBAIN-- age 88, of Block Island, Rhode Island, and Ardsley, New York, died peacefully of natural causes on April 8, 2009, in Milford, Connecticut.  A devoted father, husband, poet, and artist-- his talent, insights, interests and warm spirit inspired and touched the lives of many. He was born in Brussels, Belgium in 1920, and  moved with his parents, Lucy and Prosper, to Detroit, Michigan in 1922. At age six, his precise pencil sketch of an Indianhead penny impressed an observant  teacher, leading to a lifelong artistic journey that included studies at Cass Technical High School in Detroit and Black Mountain College in North Carolina, where he studied with Josef Albers, M.C. Richards, and other Bauhaus teachers, designers and artists.
Drafted  into the US Army in 1941, John was an infantry Corporal whose skill as an illustrator led him to create army training graphics and murals.  He saw action in the Battle of the Bulge, was wounded, and later depicted the pathos of war in his own artwork. Thanks to the G.I. Bill, John was able to study art at Black Mountain College. He was especially influenced by Josef Albers, who not only opened his eyes to new approaches to design and color, but encouraged John’s life-long pursuit of Matiere, the exploration of lines, space, colors and materials. Matiere, and later collage,  became the dominant perspective from which Urbain would create art throughout his life. While at Black Mountain,  John met his future wife-- fellow artist Elaine Schmidt. After their marriage in 1946, the couple moved to Paris, where they enjoyed a bohemian lifestyle and studied art at the Academie de la Grande Chaumiere and the Academie Julien.
John’s life as an artist was enhanced by his work as Art Director for Philip Morris, where for over 25 years he was instrumental in acquiring an outstanding art collection for the company. John’s own work has been in the collections of the Museum of Modern Art, the Brooklyn Museum of Art, the National Gallery of Art, the Detroit, Houston and North Carolina Museums of Art, the Asheville Art Museum, and in numerous private collections and galleries in the US and abroad.

Throughout his life, John worked pro bono for the civil rights movement and other local and national causes; taught neighborhood children the arts of ice skating, painting and stained glass; and served as an inspiration and guide to countless artists. Later in life, John studied poetry and had poems published  in the New York Quarterly and Yankee Magazine. A rare and indefatigable spirit, John was happiest surf casting off his beloved Block Island shoreline, crafting a tennis shot, or eating raw oysters with friends. In a show catalogue in 1992, he wrote: "I offer here a portrait of my life - not as a finished piece , but rather as a work in progress which is not so much about what I have produced as it is about the journey itself. Throughout this journey I have been struck by a sense  of indebtedness to friends and family, who have helped at every point along the way. Art, in the end, is a reflection of existence: yearning, suffering, epiphany and love."

John was predeceased by his wife and is survived by his son, Michael, of Peekskill, New York and his daughter, Catherine, and granddaughter, Carina, of Milford, Connecticut. There are no calling hours. A memorial service will be held on Saturday, April 18th at 2:00, in Scarborough, NY. In lieu of flowers, contributions to the Association of Hole in the Wall Camps or the Block Island Nature Conservancy will be gratefully accepted in Mr. Urbain’s honor. The family is in the process of establishing the John Urbain Memorial Scholarship to support the study of art for students at the Block Island High School.